As we know, the Roman legions were divided into smaller tactical units: cohorts and centurions.

The latter were led by centurions – experienced soldiers, the equivalent of officers. A lot is known about them, because today we will talk about other commanders, the rank is slightly lower. And their name is options (not binary, hehe).

The option was considered the main assistant of the centurion, was to replace the latter in case of injury/death in combat. 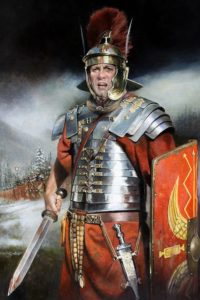 It was on the option that the main burden of training legionnaires lay. Many hours of daily exercises were a characteristic feature of the Roman army. Joseph Flaviy even noted that "training for the Romans is a bloodless battle, and the battle is a bloody training." That's the harmony.

Options, as a rule, were experienced soldiers. First, back in the republican period, they were appointed to the post of military tribunes. Then the decision was made by centurions, and sometimes – personally by the emperor himself. However, sometimes they believe that decisions were made collectively: the tribunes asked the opinion of the centurions.

Options played an important role during the battle. Their main task is to keep the system of legionnaires, by giving orders and hand-wringing, in particularly difficult situations. To do this, the option carried with it a hefty rod, neatin in its own growth. 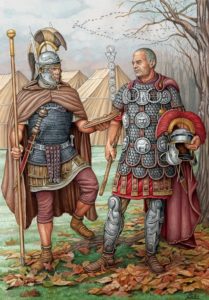 Options can be divided into two categories: "regulars" and "administrators." Despite the fact that all options dealt with documents, a number of their types were aimed specifically at staff or logistics work.

From the "highly specialized" options can be noted: "Optio carceris" (head of prison cells), "Optio valetudinarii" (chief of military doctors), "Optio custodiarum" (head of the guard), "Optio fabricae" (head of the legion's workshops), " Optio praetorii" (staffman) and some others.

The salary of the option was twice the salary of the usual legionnaire. Modern researchers sometimes put options on a par with the lieutenants of the army of later times …